And so, I was about to finally step into Russia.

As a kid, of course, it was all part of the USSR. We lived as children in genuine fear of the Cold War between the Soviets and the Americans escalating into Mutually Assured Destruction, wondering what we would do if the apocryphal 4-minute warning sounded through the school playground. We imagined underground bunkers stocked with hundreds of cans of food. But we also knew – just 20 years after Hiroshima – that even so-called survivors would die a slow and horrible radioactive death.

We carried on with our normal life, but in the background was the dark shadow of Brezhnev – with his Red army, marching through Red Square, displaying defiance and solidarity, showing the western world that they were well-drilled and well-armed. As the pile of nuclear weapons mounted on both sides, it became a terrifying game of chicken. We were gratefully too young to remember the Cuban missile crisis in 1963. By 1983, Ronald Reagan (former actor) invented Star Wars – some fantasy Strategic Defence Initiative which would intercept and destroy any Soviet weapons coming America’s way. It was all becoming like some surreal computer game. Ordinary people were playing Space Invaders in their billions. But we all knew the real stakes were real. An itchy finger on the button in the Kremlin or the White House could launch a nuclear war which would end the very existence of the world. Just because it was incomprehensible didn’t make it impossible.

Russia had already flexed its muscles with her ill-fated invasion of Afghanistan in 1979. So America boycotted the 1980 Moscow Olympic Games and the USSR boycotted the 1984 LA Games. If those were the only games they were playing – or, rather not boycotting – we could at least sleep at night.

Meanwhile the only thing we knew about Russia outside Red Square were the literally chilling accounts of Siberian labour camps. When I read Solzhenitsyn’s “Day in the Life of Ivan Denisovich” my bedroom didn’t feel quite so cold.

Back in Europe we had CND, the Campaign for Nuclear Disarmament. We had the beginning of the loosening of the Soviet grip on the so-called iron curtain countries. with the emergence of Lech Walesa and his Solidarity movement in Poland. Gorbachov became a surprisingly likable Soviet leader, and we learned words like glasnost  and perestroika. Relationships with the USSR started to defrost.

In 1986, we watched talks between Gorbachov and Reagan dramatically collapse at Reykjavík Summit. But a year later, they signed the INF treaty to start to reduce their nuclear stock piles. The world – and in particular the Soviet Union – was changing

Then came 1989. Nobody anticipated 1989. The physical collapse of the Berlin Wall, and the metaphorical tearing down of the Iron Curtain, between east and west was earth-shattering. It was a mass jailbreak of the innocents. Millions of people, weary of oppression and poverty, rising up in unprecedented waves to assert their liberty.

And then on Boxing Day 1991, the inevitable dissolution of the USSR itself. New countries were born – with romantic sounding names like Latvia, Lithuania and Estonia and the rather more formidable sounding ones like Kazakhstan and Uzbekistan

We bought new maps and new teams entered the World Cup and the Eurovision Song Contest. Political unrest of course continued as people fought over borders and territory. The terrible wars and “ethnic cleansing” in the “former Yugoslavia” during the 1990s and the fighting and unrest in various former soviet states as Moscow tried to hold back the tide of independence.

But Empires come and empires go. When they get too big they become unmanageable and break apart. The Soviets were just next in line – the latest so-called superpower taking on more territory than they could manage by oppression, exploitation and violence. In the end it all comes crumbling down.

Although not quite. The USSR had been a massive boulder which had been cracked from the inside. Large and smaller pieces had broken off, but there was still a huge, albeit smaller, impenetrable centre – Russia.

Boris Yeltsin was elected to succeed his long-term rival Gorbachov and kicked off his own project to build a capitalist market economy in Russia. Which all sounded good, but in reality, wealth fell into the hands of a few oligarchs and foreign companies hijacked the former Soviet markets. There was no “brave new world” in Russia – just widespread corruption, unrest and economic collapse. There was an attempted coup, Yeltsin seemed to take recourse in vodka, and in 1999 he handed over power to his prime minister, one Vladimir Putin.

Putin as we know, had flexed his muscles physically and politically – courting the support of his oligarchs whilst making defiant gestures to the rest of the world. He seems intent on reversing the dissolution of the USSR, reassembling the world jigsaw in his favour. He really does want to be back in the USSR. And so, last year he waltzed into Ukraine, like some brazen shop-lifter stealing land in front of the EU store detectives. They gave him an inch, so he will take a mile. We had the crime of Crimea, and the massacre of flight MH370. And now promises to rebuild his nuclear stack.

This was the Russia I was now sailing into – Putin’s Russia. Not to invade, but to take a quick look and then get out quickly within the allowable 72 hours.

The boat inched its way into St Petersburg – its very name change announces the reverse of communism. Before 1991 it was Leningrad – named after the very man of course who orchestrated the “October Revolution” of 1917, which precipitated the whole establishment of the one-party socialist state and the formation of the USSR. The man who established the Communist Party – of which my own father was a signed-up member. I am convinced that is why I was turned down for a Civil Service job in 1981. Maybe today – in recognition – they would roll out the red carpet for me.

I had expected a grand approach to St Petersburg – much as we have for other beautiful cities such as Venice or Copenhagen. But no, Russia is, if nothing else, a land of labour and endeavour. We approached through a narrow channel. On either side were working ships, cranes, warehouses and yards. And then, soberingly, the familiar Communist Blocks which I had seen before in Romania and Poland. There was nothing pretty here about St Petersburg. 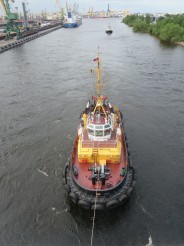 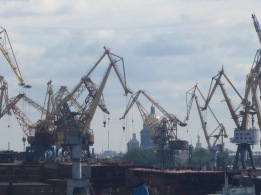 St Petersburg – like all cities I guess – contains a kaleidoscope map of its own history encased its physical landscape. It is its own diary, its own autobiography. It contains, as we seem intent on saying these days – its own narrative. A living guidebook of its own past, its own history lesson – its buildings a legacy of its previous lives.

Here, I hoped to see the prizes of victory, but also the scars of defeat. Some in the front rooms of the plazas and palaces, some maybe tucked away in the garages and attics. I hoped to find, behind the bricks and mortar, the deeper lines of history, embedded in the culture, engraved in the psyche of the ordinary Russian. There would be magnificent buildings and great treasures. But what was modern St Petersburg like? And what would I see in the faces and expressions of the people?

We would be landing in 10 minutes. And then the exploration would begin.

← Three men in St Petersburg
Once a Father, always a Father →

2 comments for “To Russia – with memories.”