I had three people to find in St Petersburg – Fyodor, Dmitri and Claude. All six-letter names, all artists and all well past their sell by dates. Well, all longtime dead as it happens. So. I would be looking for their faint footprints rather than their living feet. A painter, an author and a composer. Two of them – you might guess – were Russians, and from St Petersburg. First on my list was Dmitri – as in Dmitri Shostakovich. It will be 50 years ago this August since he composed his last, and therefore out of respect – I will not do the decomposing joke.

He was born in St Petersburg, and according to my information, I would find the apartment he lived in from 1914 to 1933 at 9 Marata Street. This is where Mrs Shostakovitch taught our nine year old Dmitri to play the piano. It was here in his 20s that he composed his first symphony and more than a few ballets. A spacious seven room apartment, by all accounts, apparently restored in 2002 by two old friends.

My interest in Dmitri is rather vicarious. I have tried listening to his music and found it pleasant enough, but rather impenetrable. My inspiration for tracking down this man is that my father, a lifelong connoisseur and expert in classical music, rated him as his all time favourite. A commendation beyond all commendations. And he had always wanted to go to St Petersburg to find where he lived, but not managed it. I would try very hard to do that for him.

I have more of a firsthand interest in Fyodor Dostoevsky. Having no classical musical prowess, in an attempt to to big up my literary prowess, I once ploughed through the classic Crime and Punishment. Turgid, depressing, fatalistic, repetitive, dry, melancholic, despairing and dark, with no discernible plot – I actually quite enjoyed it.  The book is set in a bleak apartment block in a desolate city – St Petersburg. Here, in non-fiction land, Fyodor mixed in elite literary circles, from a flat no more than 5 minutes away from Marata Street. A great opportunity to kill – or rather pay homage to – two literary giant birds with one stone (we mere mortals cannot match their artistry in metaphor can we?)

Claude of course is French. I had seen an original Monet or two in my time – most memorably in the Bellagio Hotel, Las Vegas. it was the only authentic thing I saw there. I was stunned by his giant Water Lilies. I had never seen a famous original painting before. It was alive, vibrant and three-dimensional in away a print can never be, I remember staring at it for ages and ages, drinking it in, examining the minutia of the brush strokes. I had no idea that a painting could be an emotional and spiritual experience. And I wanted more. Apparently the Russians of old “acquired” several Monet’s, and have them hanging in the largest art gallery in the world – the Hermitage in St Petersburg.

I had spent 3 hours ticking off the sights of the city by the time I reached Marata Street. My feet were threatening patricide. I walked up and down the busy street several times. I looked up at the impressive 6 or 7 story buildings, occupied on the ground floors by what seemed to be cafes, travel agencies and some indeterminate type of cash exchanges or money lenders.

No sign of a Shostakovitch museum – although I had failed to write down the Cyrillic version of his name, so it could be staring me in the face. With an internet signal as delicate as an eponymous piano concerto, and a few text messages to my woman at home, we established he lived at number 9.

I then discovered that such numbers refer to blocks not houses. I cautiously wandered into one of the indeterminate financial establishments in block 9. A man in a scruffy security uniform was slouched behind a desk, with several down and outs scattered around the room. I said, hesitantly, that I was English.

“Cash?” he enquired. In the very definition of incongruity, I replied the words “Shostakovich?” and stunningly he showed a spark of recognition. Unfortunately, he had no real English and my Russian is even less. He summonsed a young woman in a smart uniform from the adjoining room – some sort of travel agency. Between them they gesticulated for m 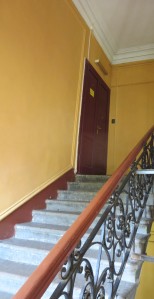 e to follow, whilst pointing upwards. We went back outside onto the street and they pressed the bell on the next door. Nothing. The man pushed it the door carefully – it was open. And with that they smiled, pointed upwards again. and left me to it.

Leaving the bustle and light of the street behind, I entered a dark, dilapidated corridor leading to a grey stone staircase. Stale urine smells the same across the world.  This wasn’t looking very promising. I walked up the spiraling staircase, wrapped around a caged lift, and onto the second floor. Nothing but solid, uninviting closed doors.

Determinedly, I rang the bell on one of them, not sure who or what, if anything, would answer. Surprisingly it was a very well-presented young woman in a bright peach dress. “Shostakovitch?” I uttered foolishly. It wasn’t the best chat up line. She smiled and pointed up to the next floor and whispered in fractured English, “I think so”.

I ascended one more floor. There was a small notice on the door. Maybe it said something about Shostakovitch – I

don’t know. Maybe it said “trespasses will be sent to Siberia”. I don’t know. I pressed the bell. Silence. I pushed the door. Nothing. I tried the door opposite. This time a big old bloke, scruffy Russian to the door. He knew nothing about Shostakovitch. I shuffled back down the stairs.

So reader – that was the end of my trail.  On the outside wall of block 9 is a plaque, in Russian, with the dates 1914 to 1933. He was here alright. He had walked up and down that staircase, looked over the same street, composed fabulous music on a piano in one of those apartments. But his memory – and his apartment – was not to be preserved, not here anyway. He always had a complex and contradictory relationship with the Soviet leadership, at different times being accused of being too anti-Soviet and then too pro-Soviet. Either way, it was a travesty and an outrage that his talent and genius is not being remembered. I’m rather glad my dad never found out.

Fyodor, on the other hand, as I discovered, has a proper museum round the corner. His apartment had been very preserved and restored. There was a woman behind a grill to take my money, and another woman running a cloakroom, and a third woman selling

guide books. There is even an audio commentary available

Dostoyevsky’s study is preserved – there are photographs, manuscripts, laminated information cards – even in English. It’s a proper museu 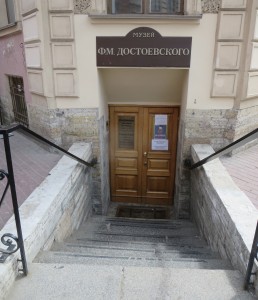 m. I was in and out in 15 minutes. The cloakroom lady smiled when I returned and made a fast running gesture with her fingers. Yea I was fast – I was in a hurry. And, no disrespect to Fyodor – I was making a point. Dosty and Shosty were equal talents, and the treatment of their legacy a street apart could not be more contrasting. It’s a Crime.

Ten minutes later, I was back on Marata street – at no 10 – in a small, dark cafe. With my traditional Russian soup. I ordered a “standard Russian” vodka, and raised a glass to Dmitri and Fyodor, and to my dad. I had done my best – I hope he isn’t too disappointed. Lets see if I could make it 2 out of 3 with M. Monet. 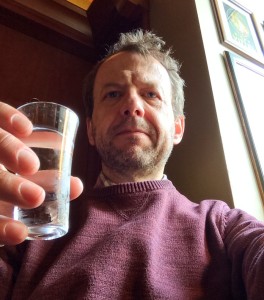 I jumped on the metro back into the city centre. I was late. I had a drop-dead deadline of a bus to a boat – or I could be in Russia for rather a long time. More than a day in a life. Particularly if they had been tracking my subversive activity in Marata Street.

I had an hour. I half-walked, half-jogged from the tube to the magnificent, opulent, stunningly architected beautiful Hermitage museum. I queued through to security, only to be told I had to leave my small bag in the cloakroom. So I queued at the cloakroom – where a bewildered Chinese girl asked me whether she could come round the museum with me. I smiled and declined. I was on a tight deadline with a Monet so see.

Back through security, this time without my bag, I push through the crowds, trying to locate the Impressionist section in the biggest art gallery in the world – the size of a small town, and packed with tourists.  I asked a woman at a desk for directions to the Impressionist Exhibition. “It is not here” she explained dolefully, it has been moved to the General Staff Building across the plaza.

Zut alors. This is an entirely separate building. All part of keeping the Europeans in their place. I suspect

they have been replaced in the Hermitage by the newly acquired Crimean paintings. I had less than 45 minutes before the bus left, 15 minutes away.

I returned to the cloakroom to get by bag. Of course there was a queue and the man in front took ages. I totally jogged across the magnificent but inconveniently expansive Palace Square, and found the entrance to the prosaically named General Staff Building. Dashing through security (hiding the fact my bag had a second compartment), I climbed the stairs and entered through an enormous door..

I frantically followed signs to French painters, running up two further flights of stairs. Renaissance art, European art – no sign of Claude. I even stumbled upon a genuine Renoir, which required at least 45 seconds of respect. In despair, I  resorted to asking someone again. They would think I was asking for money. “Monet?” I offered, hesitantly, emphasising the “et”. She nodded and pointed, The Russians sure know how to point. I followed.

There were 6 of them. That’s right, 6 (six) – original – Monets – painted by the man himself. Two of them – Poppy Field and Lady in the Garden – gave me an emotional experience. I mean seriously – physical heartfelt emotions from an oil painting. Look and feel.

Wow. It was a struggle to leave. You find a treasure, and you have to leave it behind.

I made the bus and left St Petersburg. I am writing this on the boat back to Helsinki. Tomorrow, I have a flight back to Copenhagen and then home. Right now, I am sat at the ship bar, typing this on my iPad.

Those three artistic geniuses would be laughing at me with my superficial, detached, spell-checking technology. They were men of the brush, the pen and the piano, Real and authentic art.

So – time to close down the technology and order an authentic Russian vodka. Here’s to you, Claude, Dmitri and Fyodor. It was an absolute privilege to find a few of your footprints.

← on a slow boat to St. Petersburg
To Russia – with memories. →