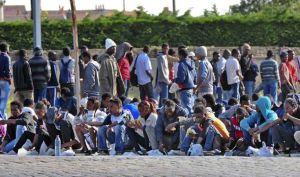 Let’s just call them people. Not a swarm of people, not migrants, not even refugees. As soon as we label people we objectify them. And if we label a group of people, we make them all the same. At least the word people allows for men and women and children, from different countries, each with their unique story.

Whilst this group of people are as different from one another as any other group of people, they do have one thing in common. They are fleeing repressive and violent countries, in pursuit of a safe and sustainable future for themselves and for other members of their families.

Some have already travelled as far as Calais. I nearly wrote “reached” Calais, but even those words can suggest an invading force or the spread of an epidemic – how careful we need to be with our words. They will have arrived in France after long and arduous journeys, across thousands of miles of Africa and or Europe. Now a significant number feel it best to take a final dangerous risk and seek to travel to Britain.

There is a limit to how many people a country can sustain, even when those people are working and adding to the national wealth – as is the overall case with immigrants to the UK. I am not sure what that limit is, and I appreciate there are specific issues with certain towns which have a sudden and unexpected influx of people – whether they come from Africa or Milton Keynes. We have a similar concern in my white middle-class town because of plans to build thousands of more houses.

bly over a sensible period of time. That would be a couple of million people. I haven’t read the latest numbers of people attempting to come across the channel hidden in lorries, but I suspect it is in the hundreds, rather than the millions. We are nowhere near bursting point.

We have just come back from a break in Europe. We crossed the Rhine at least six times between Germany, Switzerland and Austria, without being stopped, or even noticed. There was no border control into Liechtenstein – just a sign on the road. In Bad Sackingen there is a wooden bridge across the Rhine. It is a bit like a tunnel. You can enter unchecked and unspotted at one end and walk through to the other. There is no control, no check, no record. Just a white line between Germany and Switzerland. Quite a contract to the channel tunnel.

When we drove down to the city of Constance, we didn’t even know which country we were in. We thought we were in Switzerland and decided to get some Swiss Francs from the ATM. It gave us euros – we were evidently still in Germany. Nobody really seemed to care. Likewise in any other European country.

This whole “migrant issue” does seem to be peculiarly British. There are concerns in other countries, yes. I was speaking to a Dane this week about the Danish-German border in Jutland, and the moves to tighten control. But if we find it difficult to control one channel tunnel, imagine the impossibility of controlling a 67km land border, never mind all of the other routes into Denmark by sea?

There is a genuine issue here to be solved. But it seems that the words and the rhetoric used are designed to play on fear and xenophobia. There are not swarms of migrants flooding into Britain to sponge of our welfare system and take our jobs, or to destroy our national identity, or to infect us with diseases, or to fill up all of our houses. There is an invidious and dangerous slippery slope from misleading stereotyping through prejudice to discrimination and hatred. In some of the press, that slope seems to have no border controls.

I am reminded of the words on the Statue of Liberty on Ellis Island in Manhattan. In the last century, ship loads of immigrants arrived in America through Ellis Island. Tens of thousands were processed and assessed for their physical and mental condition, and if suitable, were allowed into the country. My great-grandfather was one of these people. He evidently passed the necessary tests and proceeded into Pennsylvania, where he took up a job as a miner. Tragically he died in a mining accident just a few months later. He hadn’t travelled across the world for an easy job, and certainly not to live off “benefits”.

I visited the island and remembered Andrew Bottomley. We don’t know why he left his wife and young family (including my grandfather) behind in Lancashire. At one time we thought there was another woman involved. But there was no woman from Oldham on the passenger list of the ship he sailed on out of Liverpool. We like to think he went to make money, to send home to his family. But the country welcomed him and for a couple of months anyway – he provided essential labour.

These are the words on the Statue of Liberty, on Ellis Island, the gateway into America from the rest of the world. 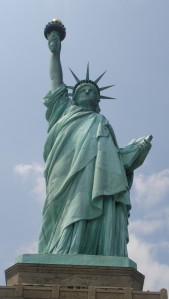 Give me your tired, your poor,
Your huddled masses yearning to breathe free,
The wretched refuse of your teeming shore.
Send these, the homeless, tempest-tossed to me,
I lift my lamp beside the golden door.

There is a genuine practical problem to be solved. It is complex and it is international. It requires great wisdom. But we are all fellow-citizens of the planet. By the grace of God, some of us are a hundred times more privileged than others. All the more reason for us to act with humanity, compassion and generosity.

← The Geometry of Germany (12 angles)
A Stroke of Serendipity →